For this project, we have sought to learn about the life history of artisans and how their experiences shape and affirm their Sefrioui identity. With the purpose of drawing the most from the interviewees as they freely unfold accounts of their lives, the setting was mostly informal and the questions were open-ended; in fact, we believe that this informality was also crucial in easing the nerves of both the interviewee (who was flustered by the sudden visit) and the interviewer herself so that the exchange was a back and forth between two parties on equal grounds with the ethnographic authority (if we may call it so) relegated to the background.

As the work was divided between groups, this essay will be dedicated to one interview; our artisan is a traditional tailor (خياط تقليدي) named Jawad Al Hasnaoui. He is a 35 years old hardworking and enthusiastic young man who has devoted 25 years of his life to this craft, and whose shop is called  خياط البسمة; that is “The Smile’s Tailor”, which we believe reflects his good-natured and gentle albeit timid demeanor. A smile indeed lingered on Jawad’s face though it held a hint of nervousness. 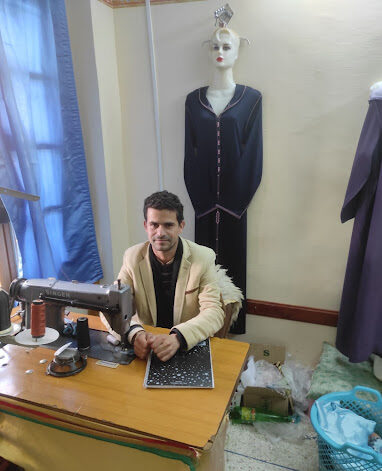 In morocco, there is a saying that urges the children to follow the craft of their parents or fathers’ (typically, in traditional morocco, the men were the ones who worked and participated in the public sphere!) In darija, the proverb is: “tbaâ lherfa d bouk layghelbouk!”

Jawad, however, chose his own path and was the first amongst his family to take up traditional tailoring as a craft and art in its own form. In fact, we can call him a pioneer amongst his family, for his cousins were inspired by him. Still, tailoring as an occupation and income source is no easy path. Much effort, time, skill and resources are required to weave traditional clothing such as Jellaba, Abaya, Qmiss and Queftan, and the wedding attires named Tekshitat (or Tkashet as another plural form). 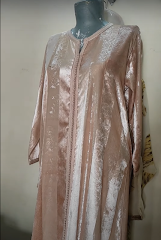 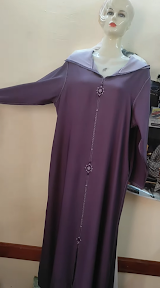 In other words, so demanding and delicate is this occupation that the individual has to be fully and meticulously dedicated to fulfilling his duty as a tailor and satisfying his customers. It is worth noting that these customers are often impatient, set unreasonable deadlines, and are undeniably hankering for the newest, most unique and appealing designs. They want the best, and the tailor has to offer the greatest best in order to both please and keep his clientele; after all, a satisfied customer would pass on the word, be it to friends or family members, which would then attract other eager customers and would bolster his reputation. As such, reputation in this domain is very crucial.

Most of these tailors begin with nothing. So meager is their capital and so alien is their name that they have to crawl out of invisibility to establish themselves and secure a decent and fulfilling income. It was implied that apprenticeship is a crucial, and almost mandatory, stage of a tailor’s career. It is a common starting point, through which young and eager apprentices either develop their skills or hone them as they are supervised by experienced craftsmen. Jawad himself began dabbling in tailoring since he was a child, but he had a more informal and personal education; he, too, took care of four apprentices and is expecting more to join him in the future. Additionally, we learned through Jawad that there are now official formations supervised by the government to aid the rising generation who are interested in this craft. It is worth noting here the government’s involvement in the country’s “Artisanat” as a cultural heritage and its charitable initiatives to support the artisans.

Jawad, in fact, received a nudge out of this ‘nothingness’ from a governmental program or initiative that enables craftsmen to rent shops for a reasonable amount as part of an association; to clarify, he referred to the space as مجمع with the association named فندق المغزل = The Spindle’s Hotel. Upon this premise, Jawad emphasized the fact that he had started from nothing, and thus the opportunity was indeed helpful; although, it was not a one-way ticket towards fulfillment. Jawad had to gradually, and with faithful patience, build a reputation for himself as the people would not trust a beginner whose name is still unknown in the market. 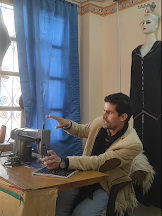 Jawad regarded his flexibility and innovation as reasons for the slow but sure amelioration of his situation and artisan status. He confessed that he preferred not to limit himself to one style and thus hinder his potential; as such, he would always try different things, challenge himself, and study the oldest and newest trends in order to complete his orders (even the unconventional or modern ones) with impeccable perfection. Still, his expertise was traditional female clothing. After hearing this, we reflected upon the gender dimension of his craft and asked him how he felt about making  traditional male clothing; his answer nonetheless was simple and logical: if men sought his work, especially from friends or family, he would try to deliver but would not advertise himself as a tailor of male clothing. As a matter of fact, this was the specialty of other tailors belonging to the same association and sharing the same milieu, and therefore the matter resembled more a code of honor to which he abided by.

Therefore, Jawad seemed more comfortable making traditional female clothing, more so because the manifold styles and plethora of fabrics and threads gave him room to experiment and allow his creativity to shine. In the attached picture, he showed us a design made of wool that could be draped over the neck (it was a request by a designer whose full name was not clear in the audio.) To him, it was one of the most challenging pieces he has ever made. Nonetheless, this example showcased his unwavering dedication to the craft- a dedication that was only fueled during the pandemic.

To illustrate the aforementioned statement, Jawad recounted how the coronavirus pandemic impeded his progress. During that period, he was haunted by a kind of stagnation; resources were scanty, and seldom did clients seek him since a nationwide lockdown was issued. Adaptation was a must though, and Jawad would travel to Fes to get the material needed or order from other cities to finish one piece of clothing. Additionally, he often visited houses in order to get the measurements and deliver the finished products himself. Consequently, he earned both the satisfaction and loyalty of his numbered clients at that time.

On a different note, the mention of Fez was intriguing, and we wished to learn more about its significance. When the interview shifted towards the cultural aspect of his craft, Jawad enthusiastically stated that both Sefrou and Fez as sites of cultural production carry an undeniable importance with regards to “Artisanat”. Actually, he referred to Sefrou as the capital of Laâkad (for example, the kind of decoration running down the middle of Jellabas as shown in the attached picture); while walking around the Old Medina, we noticed various shops specializing in these decorations (if it’s correct to call them so) as their making is an art of its own, thereby proving the importance of such tiny yet colorful pieces that constitute a Jellaba. Needless to say, a Jellaba would not be called one without them. 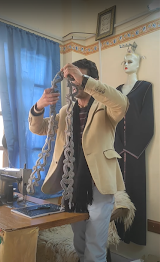 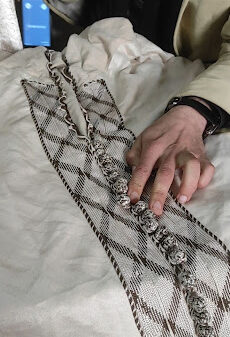 That being the case, we can now recognize the making of traditional clothing as an arduous process requiring diligence, devotion, and delicacy. As such, it remains a source of pride and fulfillment for our artisan, Jawad. Such is his commitment and passion that he could not see himself choosing a different part. To put it simply, he loves what he does and hopes to continue doing it for as long as possible. Furthemore, he also wishes to contribute greatly to this craft- to be a pioneer who witnesses and propels the advent of Moroccan Sefrioui Traditional Artisanat beyond national borders. Although, in reality, Jawad is slowly making a name for himself, especially after his participation in a kind of celebration/exhibition organized by فندق المغزل. The creative tailor drew from both modern and traditional styles to present visually appealing and culturally creative clothing pieces (Keftan and Tekshita). Moreover, in his beginner days, he and five other artisans participated in a project that strove to design the longest Jellaba across the nation, which used 36 meters of fabric and ended up being 8 meters long.

Lastly, Jawad alluded to the importance of technology with regards to tailoring. While these tailors embrace and draw immense pride from the traditional aspect of their craft, they still admit that technology -its growth and subsequently invented machinery- facilitated and eased the arduous and meticulous process of tailoring. As such, these artisans spend less time and effort on the making of a single piece of clothing. However, it is worth mentioning that there are women, usually uneducated  stay-at-home moms, who take up the craft of hand-making traditional clothing. Thus, they secure a unique but demanding source of income. 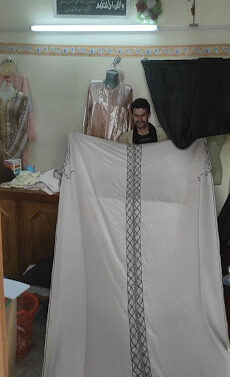 To conclude, Jawad as a sefrioui artisan who specializes in tailoring displayed a solid sense of attachment to Sefrou and its culture, wishing to add to its notable heritage in his own way and through his own craft. In a sense, his participation in the beauty pageants of the cherry festival is but one example of this Sefrioui belonging and personal identity.