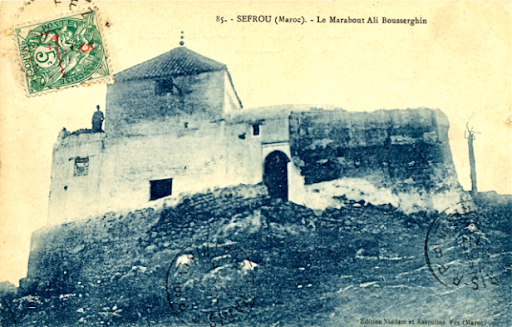 Located in Sefrou and specifically, at an altitude of 900m, the famous saint or Zaouia of Sidi Bousserghine is said to have existed since the 16th century. So notably intriguing is its history, so magnificent is its view, and so renowned is its ritual significance that wishful and weary souls often seem to seek it. In other words, people visit Sidi Bousserghine for a multitude of reasons. Still, there is no denying that their visits and subsequent sacrifices are often due to personal motivations and needs. 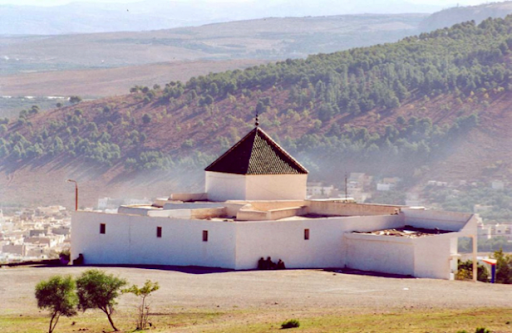 Stories of the miracles bestowed upon the pious visitors of Sidi Bousserghine have disseminated across local borders, drawing visitors from all around Morocco who, for instance, either seek to let their eyes feast on the surrounding view or strive cure their infertility in the adjacent spring. Magical remedies are the primary reasons attracting these souls. In Morocco, people believe in the supernatural spiritual intervention that banishes all that is ailing them in return for accomplishing certain services or sacrifices.

“Nothing is given for free, and nothing should be taken for granted” is a commonly agreed-upon principle. Saints like Sidi Bousserghine require a giving-back, a kind of display of piety and devotion to fulfill the visitor’s wishes; however, the identity of the one who set this rule remains shrouded in mystery. Perhaps in desperation or because of their sense of cultural belonging, people do not question this ritual and abide by what must be done.

It is said that these required sacrifices range from black animals such as goats and hens; to elaborate upon this, the color black is symbolically linked to the magical and mystic, and thus, animals are picked according to this color. White, as a symbol of purity, is also a choice. Although, the most crucial element of these rituals may be the blood of these sacrifices, which is used during these rituals. Nonetheless, its specific use and function remain a mystery, as far as we know, since there are no personal accounts from frequent visitors or the caretakers of the saint themselves. For this reason, only the briefest descriptions are included.

All that is known is that the saint- or the spirits lurking around or inhabiting it deserves the utmost respect and is ritualistically honored. People go over and beyond to satisfy what they assume are the wishes of these otherworldly and all too-powerful beings. Moreover, the water near the saint is considered sacred and miraculous; based on water being the source of life, these wishful visitors or pilgrims use it either by drinking it or dousing themselves in it to cure their illnesses and burdens. 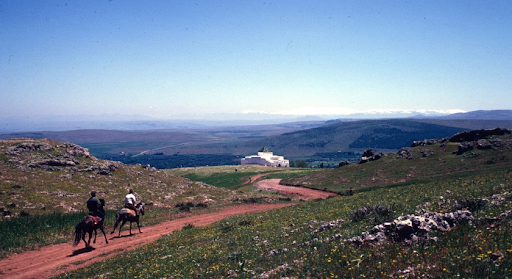 The rituals are undertaken during Ramadan, however, remain a mystery. The recent survey yielded little to no results and thus lingers the mystery surrounding these cultural and ritualistic practices.

As for Ramadan itself, the way the people of Sefrou go on about their day does not differ from how others experience it in other regions. For example, the people in both Casablanca and Fez share it similarly. Indeed, people perform their religious duties by fasting and praying while fulfilling their daily responsibilities. Their economic life witnesses no suspension or pause; to illustrate this, while businesses start late (usually around 11 am) and close later than usual (beyond midnight even), life continues for the fasting Muslims.

As such, collective experiences do not differ, but perhaps personal ones could witness other changes affecting individuals as they adapt to the absence of food and water (or even Tobacco or other substances for those addicted). “Adapting,” in fact, is a crucial aspect of Ramadan. Though fasting may be a practice or duty to be fulfilled since coming of age, getting used to the sudden ‘absence’ of necessities from dawn until sunset (roughly from 4 am until 7 pm) is a challenge. Moreover, what is also not considered is how people exempt from fasting (be it due to sickness or menstruation) experience Ramadan. That is why personal accounts are vital for grasping the essence of Ramadan and taking a peek into the personal life of fasting Muslims.