Traditionally in Sefrou, and before the rise of the feminist empowerment movement, men occupied the public sphere as they pleased. They freely engaged in the workforce, led and shopped at markets, and even monopolized politics. This forced women to live privately in the past- hence their exclusion from the rest of society and the lack of their engagement. 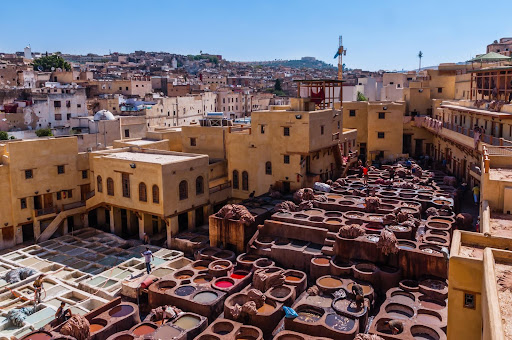 As discussed by Amal Vinogradov, “The inherent limitations in the character of women confine them to the sphere of ‘nature,’ whereas men are capable of operating in the sphere of ‘culture.’ These two worlds of ‘nature’ and culture’ correlate with the private and public sectors of social life. A woman, therefore, is relegated to the ‘natural’ and private world of child-rearing and general domesticity. At the same time, a man’s life unfolds in the “cultural’ or public world of politics, trade, and religion” (1974:193). In other words, men were historically encouraged to lead social lives outside of their homes. At the same time, women were burdened by a secluded life, destined to raise children and perform house-related duties. However, a drastic change has occurred with the rise in positive feminist movements. 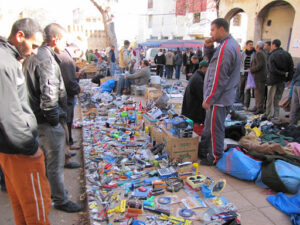 Throughout the years, the status of Moroccan women witnessed a shift along with their increasing participation in the public sphere. Women gradually began extricating themselves from the web of invisibility and had been occupying male-dominated spaces previously; some women founded for themselves jobs of their own, thereby pioneering new areas of artisan or cultural production. Labor was no longer restricted to one specific gender; in its rich forms, cultural production has since involved individuals from various backgrounds and possess manifold skills. Some even chose not to limit themselves to one area of expertise. 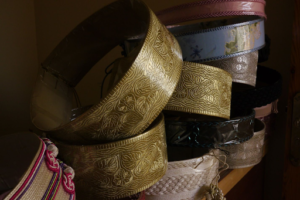 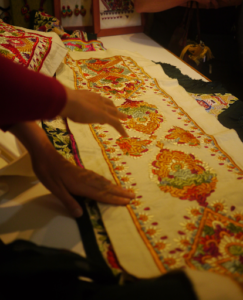 The attached images are an example of the scope of Morocco’s, specifically Sefrou’s, material culture. It is worth noting that there still exists some divisions and preferences as certain areas are specifically gender-dominated; the statement above does not deny this but instead highlights the visibility of women and their significant contribution to cultural production. For example, embroidery can be mainly considered women’s expertise, while making musical instruments such as “Taârija and Bendir” is taken by men. Additionally, the application of Henna is made solely by women, for physical contact is required for its application. Henna itself carries specific cultural nuances as it is used for celebrations and rituals, warding off the evil eye, and beautifying and embellishing. For this reason, it intimates a sense of privacy and secrecy- or the banishment of the male presence. Although men can also apply it to themselves, what people usually hear of is “Neqasha and not Neqash.”

Furthermore, the Hammam is another aspect of labor governed by this gender binary. Body scrubbers are often forgotten as significant laborers within these cultural practices. Naturally, the Hamam as private space is divided by gender, and any kind of mingling is simply unthinkable. Still, these individuals perform daily a cultural practice that is often neglected when documenting the culture of different sites, specifically the participation of various actors in ‘living’ this culture. 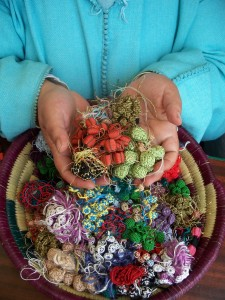 Another important site would be the Souk or Market, wherein individuals mingle and seek a decent source of income regardless of gender. Still, it is worth noting that men can also sell products designed for women. For example, women’s traditional clothing is tailored mainly by men (as shown in Project 4: Artisan Interview); also, even feminine underwear can be found displayed in shops with men standing behind their counters, praising the fabric and style of each piece in favor of attracting their customers. On the other hand, women have now started forming cooperatives wherein they, for instance, work on extracting oils and selling them in jars, or work on textile and carpet-weaving and button-making, thereby securing their independence and fulfilling their emancipation in their way. 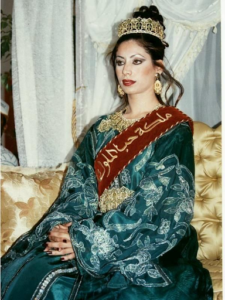 Lastly, and regarding the cherry festival, women as laborers also participate in making the Cherry queen’s sash. This piece of fabric is aesthetically and meticulously embroidered in a style that would be worthy of the celebrated winner of the beauty pageant. Her clothes also result from hours of careful and crafty dedication to complement her features, amplify her beauty, and display the city’s pride. Lastly, one more thing that should not be forgotten is the labor of uneducated, often stay-at-home moms who take up the job of hand-making traditional clothing in an age of constant technological advent; to elaborate, even with the existence of sewing machines, some people still prefer the unique yet arduous product of hands. Thus, these self-employed women make a living by satisfying these customers by dedicating hours and hours of laborious work to hand-stitch clothing that would later be proudly displayed in ceremonies.

Gender and the Cherry Festival

So splendid and renowned is Sefrou’s Cherry Festival that it never fails to display the richness of Morocco. 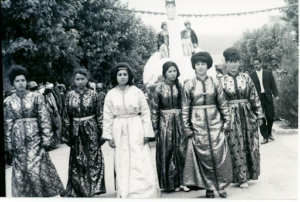 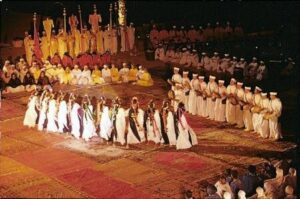 During this long-awaited festive event, the residents of Sefrou promote Moroccan culture and put on a beautiful display of arts, and cuisine, with the culturally significant cherry as the nucleus. The festivities last multiple days during cherry harvesting season as it is an agriculturally important crop in the area. Although the gender dimension may seem unimportant, women’s role in the festival remains vital, impactful, and unchanging since it cannot happen without them. Moreover, the festival becomes an opportunity to show off extravagant clothing and compete for the prestigious title of the “Cherry Queen.”

On a different note, this event challenges the traditional stereotype of women living quiet and private lives, allowing them to express themselves through whichever means they choose. This celebration contributes to the progressive nature of women’s empowerment by confronting old and outdated gender roles. 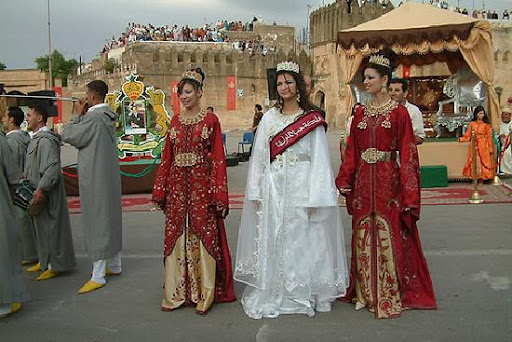 Furthermore, the celebration has changed over the years, as discussed in the interview with Sefrioui residents. They talked about how it has become more economical over the years due to increases in tourism. In addition to this, candidates for the Cherry Queen title are praised for their appearances and garments, but they must excel intellectually; they have to have a certain level of education and display a passionate interest in some social cause. They also have to appreciate their culture and embrace their heritage. Therefore, although it is a fun event anchored in entertainment, it goes without saying that an immense amount of work is put into its preparation and execution for everyone involved. Therefore, the Cherry Queen should not only focus on the title and money but also engage in utilizing their social influence to bring justice and equality to more females in Morocco. However, some girls take the title and the money to use for their benefit instead of using that money for social gatherings. The roles of the Cherry Queen remain the same. However, the only difference is that the girls are chosen from all parts of Morocco.