Tolerance Between Muslims and Jews But Exclusion of the Amazigh Community 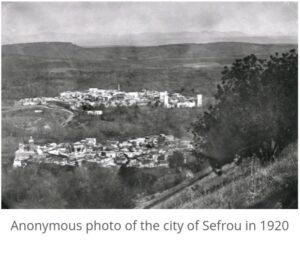 In Sefrou of Morocco, different cultures and religions are unified, such as Muslims, Jews, and Christians, with multiculturalism and diversity in the face of Sefrou. In Sefrou, the Jews and the Muslims have shared neighborhoods where they celebrate each other’s cultures by convincing each other to join their religion, share their festivals, and build a family together. While multiculturalism is the face of Sefrou, there is a form of exclusion behind closed doors with mistreatment of the Amazigh people.

Sometime around the thirteenth century, the Jews were fleeing from the intolerance of Fez due to their religion disrupting the practice of the Muslim faith; they ended up being discovered by immigrants from Tatilalet (the southeastern of Morocco). This led the immigrants in allowing Jews to reside in an Islamic town known as Sefrou. Throughout centuries, Sefrou was recognized for combining the two religions in the same city, where they often offered them places to reside due to the forced migration pushed by Fez.

However, there is some form of intolerance in Sefrou. Other non-Jewish people often mistreated them. Others would constantly harass children in the neighborhood, throw garbage at their doorstep, and reside in a community with limited resources. At that point, the Jewish people and their Muslim neighbors took to the streets to demand freedom of citizenship in Sefrou. Since then, both religions have put aside their differences and began glorifying each other’s religion. Eventually, this led to a cultural overlap where both religions now share what they do daily, such as food,  clothing, music, and even practices visiting each other’s shrines. In the modern-day Sefrou, the Jewish are now in charge of maintaining the town of Sefrou while maintaining a solid relationship with the Muslims.

Based on this clip, the Muslims and Jews have developed a strong connection despite their religious differences. Muslims have allowed Jews to reside in the center of Sefrou near medinas for better protection and security. In return, this created a strong relationship between the Muslims and the Jews. The Jews allowed the Muslims to learn about their culture, receive blessings, and create a family together. When creating a family together, it not only means marriage among two people of a different religion but more so based on tasks. 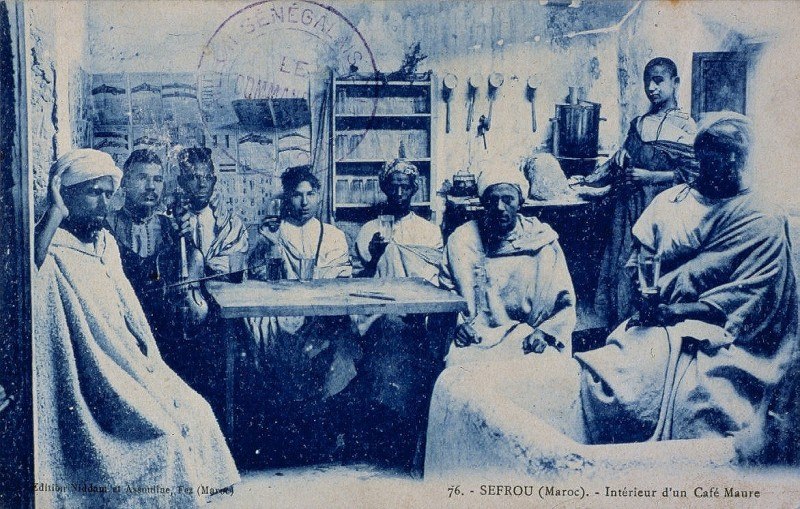 Jews of Sefrou. (1976). Berbers , Jews and Arab Muslims hanging out in a coffee shop in my town Sefrou, Morocco. Facebook. Retrieved by: https://www.facebook.com/JewsOfSefrou/photos/basw.Abp4x59ZRpCQUGQC2Ylo1AQdgq

While Sefrou continues to glorify multiculturalism among different religions and cultures, there are forms of exclusion they keep behind closed doors, such as the exclusion of the Amazigh people in unity of all religions in Sefrou. They are referred to as the “Berbers,” which is short for “Barbaric” or “Barbarian.” This name given to the Amazigh community is seen as a threat to the Muslim community. They’re depicted as “savages” for taking to the streets to protest for equality and recognition of their cultural background. On the other hand, Muslims feel that this was the elimination of the Muslim identity in Sefrou.

However, the Amazigh community in Sefrou wasn’t always depicted as “savages” in the past. When the French conquest took place in the Middle Atlas (1914-20), disrupting the practices of religion to take over the territories in Morocco by exporting violence as a way of expressing dominance. The French Army believed that the use of violence was retaliation to those who didn’t obey their orders and prove to themselves that they were superior to the Amazigh people. The Knefia Campaigns Political Action showed how the French Army had altered the lives of the Amazigh people in many ways, such as the increase of death rates, destruction of their homeland, and forcing them to migrate to other areas taking over their territories. In retaliation to the French Army, the Amazigh community had engaged in a war with the French Army at the Middle Atlas. Despite the skyrocketing deaths of the Amazigh warriors in this battle, they were looked at as the “true warriors” who had the protection of their homeland compared to the French Army. Unfortunately, the Amazigh people have yet to gain the same equality as the muslims and jews. 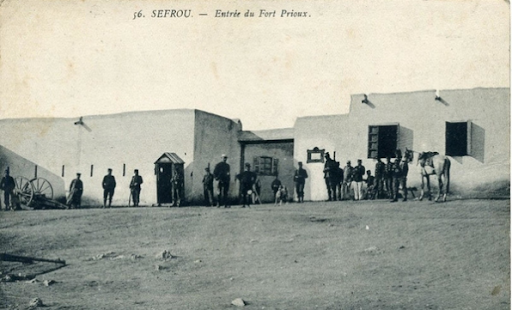 Rahma Hamoush bint Muhammad bin al-Talib, known among the resistance and the Liberation Army as Rahmat al-Bahluliya, was born in the year 1 906 in the Khandaq in the Bhalil area near Sefrou. After a series of attacks, Rahma supplied the resistance with weapons they carried out against the French colonialists. She performed heroic actions that astonished the men as she transferred these weapons from the open place in which she hid to her home, tucked them among heaps of firewood, and in the baskets of wheat and barley. She also stuffed machine guns and rifles in wool spools, keeping them amid her belongings until Its role came. The resistance men requested their guerrilla actions against the occupation soldiers and traitors. 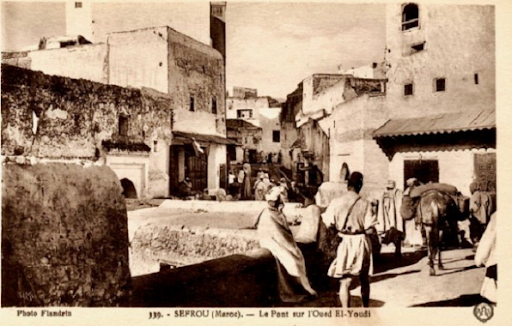 The French authorities occupied the city of Sefrou in 1911 AD.

The attack took place in 1953 AD on the barracks of the French army in Sidi. Boussergan in Sefrou and the resistance fighters carried a lot of weapons and placed them in one of the stables on the outskirts of the city. The city and its surroundings were famous Presentations are communication tools that can be used as demonstrations, lectures, speeches, reports, etc. It is presented chiefly before an audience for their resistance to colonialism, and one of the important mujahid figures is Rahmat al-Bahluliyah.

Doctor WEISGERBER took another photograph showing the entrance of the Cherifian tabor, which came to strengthen the security of the city of SEFROU. Photo published in “L’ I l lustration” of September 23, 1911. 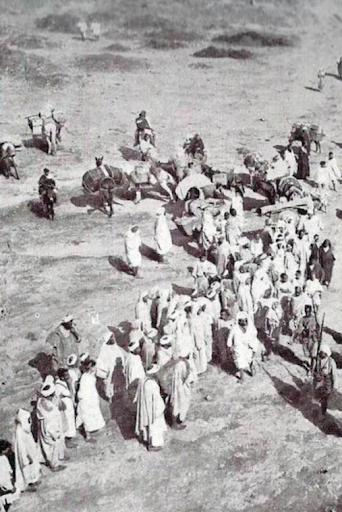 The historical document shows the adventures of the capture of Sefrou by the colonial army led by General Dalbiez and General Gouraud in 1911. 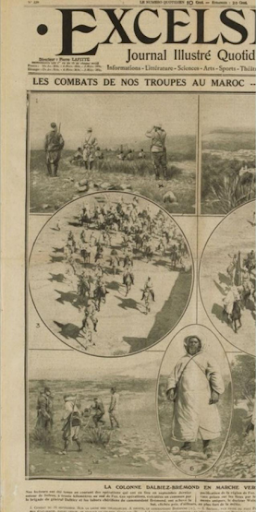 Historical points on the capture of Sefrou by the troops of the Cherifian mehalla and then not the colonial troops. 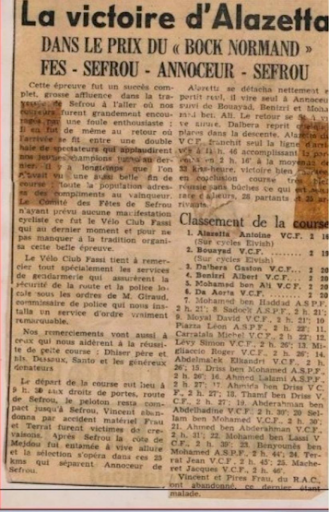 About the cherry festival, here is the price of the copy of the Excelsior newspaper of October 20, 1911. 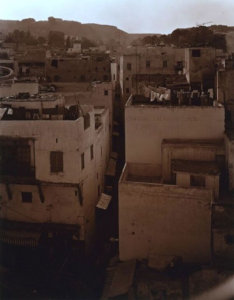 Once upon a time, Sefrou was described as the ‘little Jerusalem of Morocco’, wherein diverse cultures, traditions, creeds, and languages intermingled freely. With tolerance, openness, and amity as its pillars, the colorful city of Sefrou once painted the picture of a multiethnic Morocco distinguished by the myriad of languages spoken by its people; in fact, the Arabic language (Moroccan Darija) alongside Tamazight dialects as well as Hebrew and French were all means of self-expression and communication. This only served to solidify the widely recognized peace and togetherness governing the lives of Jews and Muslims within the community of Sefrou.

Needless to say, there was harmony in Sefrou’s undeniably charming heterogeneity, branding its history and intriguing those who seek to grasp the riveting concept of ‘Multiculturalism.’ Indeed, during the nineteenth and the twentieth centuries, Sefrou was an ideal home of cohabitation and tolerance as it harbored both Jews and Muslims; however, what remains now is a dwindling Jewish heritage and various accounts of the harmonious lives led by Sefrou’s multi-ethnic populace.

The following illustrations exhibit what could be a lost past- one that ended in ruins and desertion but that has been immortalized in pictures. Most importantly, it is a past that supposedly lingers in the memories of the people who inherited Sefrou, specifically their ancestors’ stories of a thriving, pluralistic, and tolerant Sefrou. 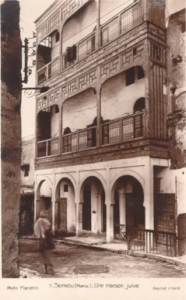 These accounts and narratives on which multiculturalism is grounded are shrouded in secrecy and bias. All the texts extolling Sefrou for its open and tolerant heritage carry an underlying sense of the ‘unsaid’; in other words, they possess absences that signify an overly romanticized past and are obscured by a veil of nostalgia. The notion of tolerance itself entails that something is missing, if not that the truth is meticulously and subjectively crafted. After all, tolerance is not acceptance, and thus the former hints at some rejection and is yoked to intolerance itself. To put it quite simply, it signifies a history of reluctantly bearing and coexisting with the ‘other’ instead of fully accepting them, thereby accounting for the gaps in Sefrou’s multiculturalism. 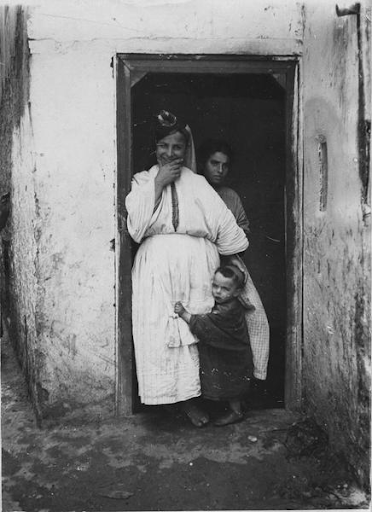 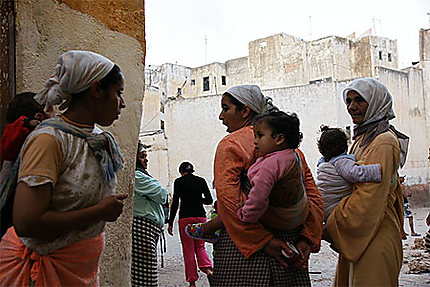 It is worth noting that amongst the voices seemingly absent in the discourse revolving around Sefrou’s Multiculturalism is women. Gender representation occupies less of a central focus compared to religion or history. Questions thus arise: for what reason do scholars grant less attention to the perspective of women? Undoubtedly, they too played a part in weaving Sefrou’s rich tapestry of cultures, creeds, and languages. Then why are their experiences relegated to the margin and not regarded as the nucleus of Sefrou’s renowned heritage?

Therefore, it is safe to assume that this absence or underrepresentation falls in line with women’s precarious status within the Moroccan society and the nonexistence of feminist movements at that time. Women were, if not remain, prey to the snare of patriarchy, tradition, and misinterpreted religion and were explicitly victims of rigid and discriminatory mentalities that tolerated them at best.

Because they were intellectually, culturally, economically, and legally underprivileged, women in Sefrou had to resort to sex work to survive. According to research dealing with sexually transmitted diseases, precisely one that aimed to raise awareness of HIV-related cultural and policy developments throughout the world, Sefroui women and, more so, Amazigh women residing in Sefrou resorted to sex work as a solution to their predicament. At the same time, their marginalization was aggravated by their illiteracy and general unawareness of sexually transmitted diseases. They turned old Jewish shops into mini brothels and strove to rectify their financial situation; only this jeopardized their socio-cultural image and health. In a cruel paradox, not only was their worth derived from the money they earned, but it was also tarnished by the means whereby they could quickly secure money.

Nevertheless, this is but one example of the hidden truths obscured by the proclaimed beauty and vibrant history of Sefrou. Tolerance, in this sense, intimates the marginalization of women. 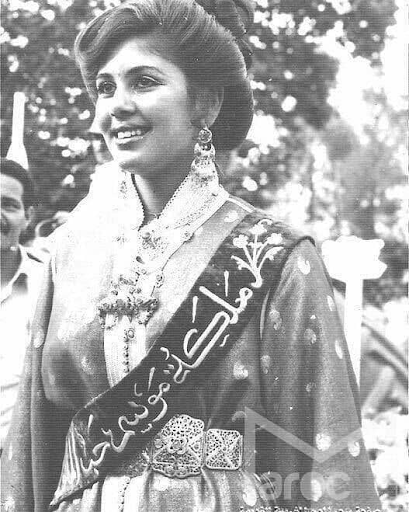 Another example of the underrepresentation of Gender in Sefrou’s multiculturalism is the unaddressed significance of the Cherry Festival. The three-day annual event is undoubtedly a festivity celebrating Moroccan Folklore, whether through food, dancing, or art… The possibility alone speaks of the vibrant culture of Morocco, all that essentially mingles and blooms in Sefrou, which is mainly overshadowed by the history of the Jews and Muslims in scholarly articles.

Furthermore, one cannot speak of the Cherry festival without mentioning the highlight; that is, the beauty pageant selecting ‘Miss Cherry’ or ‘Cherry Queen.’ While on this topic, other crucial questions arise regarding the beauty standards dictating the participants and winner; are they harmless or harmful to women’s perception of themselves and their body image? Also, does this event play into the objectification of women?

Following this line of thought leads to inquiring into the existence of women as aesthetic objects. It also highlights that tolerance is not necessarily rooted in respect; indeed, affection wanes in the face of bearing with the presence of differences. 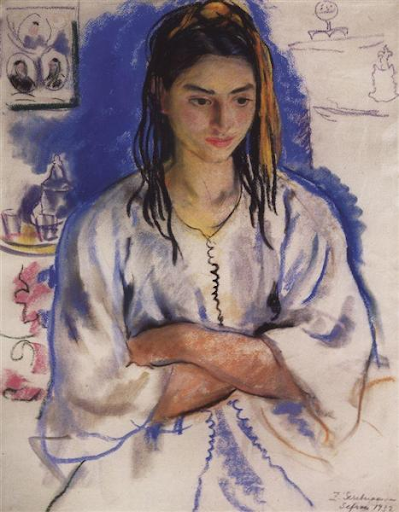